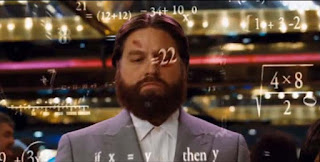 Card Counting has achieved an almost myth like status among the mainstream.  A lot of this has to do with movies such as The Hangover, 21, and Rain Man. Many seem to think that card counting is illegal (it is not.)  Others believe you must have savant like abilities (you certainly do not, although they wouldn't hurt).  It is also believed that we must memorize every single card that is played in the deck (you guessed it, not true).  Generally speaking, the ability to count cards is probably easier than you ever imagined, while the ability to make significant money while card counting is much harder than you have ever imagined. So if one doesn't have to be super intelligent with a photographic memory all the while dodging the law to count cards, then how does one gain an advantage in a blackjack game?

One of the first things that must be done is your research on the game that you will be playing.  Not all blackjack is created equal, and you must make sure you have a beatable game.  Different rule sets will change the house edge, and while they may not sound like much, every little bit counts.  Your long term advantage if you are solely counting cards is only 1%-2%.  So that 6 to 5 payout on the blackjack game you're playing reduced your edge 1.71% and effectively killed all profits.  In other words AVOID 6 to 5 blackjack, it might as well be a scam.

If there are any terms that you do not understand please check out my Blackjack Definitions (Migrating Soon) page.
Here are some of the bigger rules you'll see, and their effect on your advantage.

Number of Decks:
As you can see, the fewer the decks you are facing, the better it is for the player.  Generally speaking, you'll find more of the 1 and 2 deck games in the higher limit rooms, and the multiple decks games on the regular floor.  Don't give up on the multiple deck games though, there are plenty of rules that will still let them be profitable games to play, and are actually where I spend the majority of my time counting.

Before we can go into how much each rule effects our advantage we need to come up with a standard game with which to base the rule changes off of.  We'll use what's considered the standard in Vegas.
Now for the rule changes and their effects (we are going to assume a 6 or 8 deck game):
There are other rules out there, but these will be the most common ones you'll run into.  If you need information on how to figure these out yourself or for obscure rules I'd check out Peter Griffin's The Theory of Blackjack.


Penetration (that's what she said)

Penetration in blackjack is referencing the depth of the deal, or, in other words, how many cards are dealt before the deck is reshuffled.  This is a huge factor in the playability of the game which can turn a juicy, profitable, game into a sucker's game.  In general, the shallower the penetration is, the larger the bet spread you must make to beat the game.  Larger bet spreads equal more heat from the pit crew which may shorten your stay at a store (casino) considerably.  I'm not going to go into great detail on penetration, as the information on it is widely available, but just know to keep an eye on where your dealer is placing the cut card.  If anything less than 75% of the cards are being played it's probably time to move on to a new game.

So now you've found yourself a game that can be beaten, what's your next step?  Now you need to determine what the correct basic strategy is to reduce the house edge against you.  The best way to do this is to use a basic strategy engine.  My personal favorite to use is the one at  Blackjackinfo.com.  They also have a wonderful message board filled with very helpful posters.

Once you find the one for your particular game you need to have it mastered before every sitting down at the blackjack game.  It may not seem like much to make an error here or there, but I can guarantee that if you don't have perfect basic strategy you will destroy your edge, and you aren't anywhere near ready to be a card counter.  Here is the basic strategy for the game described above in the rules section:

Now that we have the basics out of the way it's time to wade a bit deeper into card counting which can be found in Part 2.
at 6:42 PM